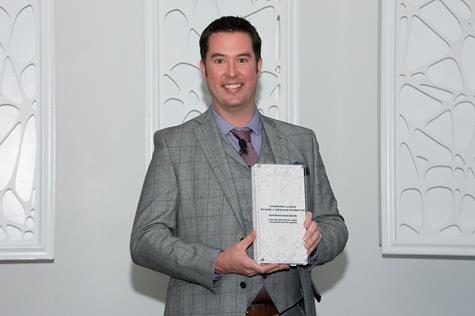 If you plan to visit the Galena, Illinois area any time soon, there is only one choice for lodging that will bring you the best of this historic, charming town. The Jail Hill Inn, which recently joined the ranks of other Select Registry properties around the country, is Galena’s #1-rated Bed and Breakfast. Housed in the historic 4-story brick building where the Jo Daviess County Jail once operated, the Jail Hill Inn offers its guests an unmatched glimpse into the history of Galena.  Coupled with the luxury you expect from Select Registry-branded Inns, there is simply no better place to stay when you’re in Galena.

In the short year that the Jail Hill Inn has been open for business, we have already received awards and accolades that we thought were well out of our reach.  The original county jail was built in 1878, and stayed in operation until 1977.  After that, the building sat empty for 2 decades, until Owner/Innkeeper Matthew Carroll bought it in 2015 with dreams of turning it into a Bed and Breakfast.  Fast forward to today, and the Jail Hill Inn is an extraordinary example of how old, derelict buildings can be preserved and renovated into something spectacular.

Today, you’ll find significant and beautifully preserved remnants of the jail’s original architecture throughout the Inn.  Elements like the original wooden beams and vaulted ceilings on the 4th floor, sections of the original concrete floor, the 14-foot curved brick ceiling on the second floor, and 23 of the original 9-foot tall windows stand as stunning reminders of Galena’s historic past, and have become a favorite talking point for Matthew and his guests.  In light of the incredible restorative work done on the Jail Hill Inn, Matthew was awarded the Adaptive Use Award in 2016, by the historic preservation group, Landmarks Illinois. Each year, this organization honors nine outstanding examples of excellence in historic preservation, with the goal of inspiring the preservation of other important and historic buildings.  The Adaptive Use Award, specifically, is given to businesses, like Jail Hill Inn, that allow for the continued use of a historic structure.

Not only has the Jail Hill Inn revived a once-empty building, it has brought a new life to the town of Galena.  The re-opening of this stunning building means increased property values, a new and appealing aesthetic to the surrounding neighborhood, new tax dollars and employment opportunities, and a new type of luxury lodging for the town of Galena.  To see the incredible restoration of this building, book a room at our historic hotel today.

Concerned about COVID-19 and travel?

Here's What We Are Doing